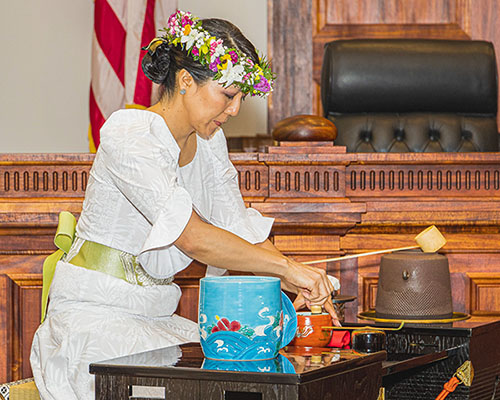 Yushinkai, a prominent Hawaiʻi Chadō Urasenke tea group led by former First Lady of the State of Hawaiʻi Jean Ariyoshi, honored Chief Justice Mark E. Recktenwald as a champion of peace, consistent with the mission of the Chadō Urasenke tradition, which promotes peace and international goodwill through The Way of Tea. 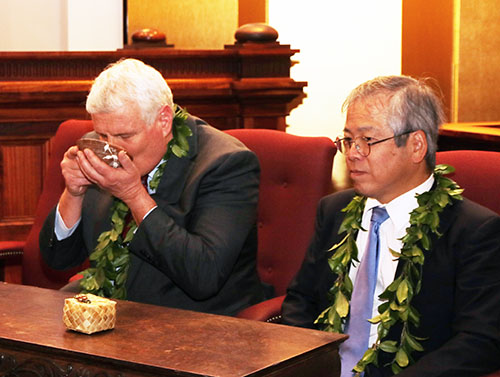 About the traditional Japanese Tea Ceremony

The Japanese tea ceremony, also called The Way of Tea, is a cultural activity involving the ceremonial preparation and presentation of matcha (抹茶), powdered green tea. It is a choreographic ritual of preparing and serving Japanese the tea together with traditional Japanese sweets to balance the bitter taste of the tea. Preparing tea in this ceremony means pouring all of one’s attention into the predefined movements, in a meditative state, in spiritual communion with the invited guests.

Tea was first introduced to Japan in the 9th century by a Buddhist monk from China, where its medicinal purposes had been known for millennia. The Japanese tea ceremony was ritualized by Sen Rikyū (1522-1591) in the 16th century. During the era of his grandson, Sen Sōtan, the san-Senke or three “houses of Sen” or schools of the tea ceremony, which derive from the Sen Rikyū name came into being: Urasenke, Omotesenke, and Mushakoji senke. Three sons of Sōtan each became heirs to the three schools of teaching Chadō (The Way of Tea). The head (iemoto) of the Urasenke tradition carries the hereditary name Sen Sōshitsu. The present head of Urasenke is Zabōsai Genmoku Sōshitsu. He is the 16th generation in the line that originated with Sen Rikyū in the 16th century. Currently, there are over two million practitioners of the Chadō Urasenke tea ceremony in Japan.

Dr. Sen, who attended the ceremony, was instrumental in establishing the first Urasenke chapter outside Japan in Hawaiʻi in 1951, as well as later chapters around the world. He has performed tea ceremonies around the globe, including in Brazil, China, Germany, India, Italy, Mexico, Russia, and United Arab Emirates. He served tea at the Millennium Assembly for the International Day of Peace at the United Nations, to military leaders at U.S. Naval Academy in Maryland, the U.S. House of Representatives in Washington D.C., to Pearl Harbor survivors at the USS Arizona Memorial, and Hawaiian dignitaries at Iolani Palace, as well as to international VIPs including the late Princess Diana and Prince Charles, Vice President Al Gore, the Clintons, Premier Gorbachev of Russia, and First Lady Laura Bush. Dr. Sen was appointed a UNESCO (United Nations Educational, Scientific and Cultural Organization) Goodwill Ambassador in 2012 in recognition of his contribution to world peace and culture through the tea ceremony. His philosophy is to spread world peace, one cup of tea at a time.