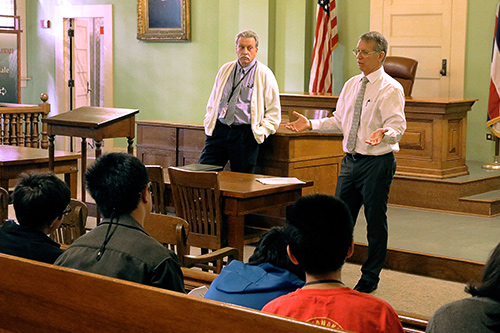 Hawaii First Circuit Judges James C. McWhinnie (left) and James H. Ashford (right) spoke with students from Kawananakoa Middle School who visited the Hawaii Supreme Court Building, Ali iolani Hale, on March 7. The judges shared information on how one becomes a judge and the judge’s role in applying the law equally to all people, regardless of who they are.

In observance of National Judicial Outreach Week 2019 (March 1 – 10), the Hawaii State Judiciary has produced videos with judges answering some of the questions most frequently asked by the public. The videos are part of the Judiciary’s ongoing efforts to increase public understanding of the courts and our system of justice. The topics are:

How Sentencing is Decided in Criminal Cases
https://youtu.be/gM5dHh6HY04

These and other informative videos are available on the Judiciary’s YouTube page at:

National Judicial Outreach Week is an annual American Bar Association (ABA) initiative which began in 2017. During the week, current and retired judges across the country engage the public to discuss the rule of law – the legal principle that everyone is accountable to the law, no one is above the law, and all people are to be treated equally in accordance with the law. 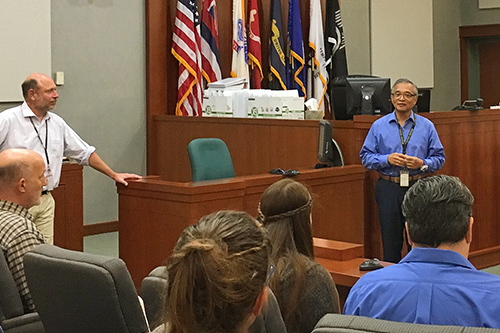 Hawaii Fifth Circuit Chief Judge Randal G.B. Valenciano spoke with Business Law students from Kauai Community College who visited the Puuhonua Kaulike court building on March 5. He shared information on rule of law, juror responsibilities, the structure of the court system, and the different roles of the district, circuit, and appellate courts. He was accompanied by his law clerk, Charles Foster (left).

In addition to releasing the new videos this year, judges from every judicial circuit in the state are sharing information with community members about the ways the courts work to ensure that parties on both sides of any issue receive a fair and impartial hearing, and are able to exercise the rights afforded them under our laws.

This month, the Judiciary invites people to contact their local courthouse to inquire about having a judge speak to their school or community group on the rule of law, our system of justice, and the resources and public services available through the courts.