HILO, Hawaii – Byron K. Poy and Krystal Brumaghim were named winners of the 2018 Spirit of the Judiciary Award. They were two of the four winners selected for this statewide award, which recognizes Judiciary employees who consistently exemplify a helpful and courteous attitude while providing service to the public and who foster a positive working environment.

Poy is a Court Document Clerk in the Legal Documents Section in Hilo and Brumaghim is a Court Clerk in Kona/Kamuela. Both are part of the Court Support & Operations Division.

Poy, who has held various positions during his seven years with the Judiciary, was honored for his professionalism, compassion, and superb attitude in helping individuals who visit the court.

“Byron started with us as a student helper while attending Hawaii Community College,” said Third Circuit Chief Judge Greg Nakamura. “We hired him after he graduated and he’s done such a terrific job for us that he’s now training new employees. Everyone — court staff, attorneys, and the public — rely on Byron to guide them through the sometimes complex world of court documents.” 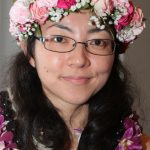 Brumaghim, who has worked for the Judiciary for 11 years, was described by her coworkers as the calming influence “in the midst of the hustle and bustle of the hectic District Court proceedings.”

“Krystal engages with everyone in the courthouse in a warm, friendly manner,” said Chief Judge Nakamura. “She took it upon herself to prepare a list of defendants who are in compliance with their community service, classes, and payments so that they can be called first during hearings and recognized for their successes. Their success inspires others in the courtroom who may be facing similar court-ordered requirements.”

Also honored with the statewide Group Meritorious Service Award was the Third Circuit’s Juvenile Client Services Branch, Client Services Division for its successful implementation of the Juvenile Justice Reform Act. This act required changes in the handling of juvenile delinquency matters in the Family Court. The major changes included training of judges, prosecutors, defense attorneys and juvenile probation officers on reform concepts which are founded on evidence-based terms of probation; use of statewide youth assessment tool and incentives for positive behavior; Principles of Effective Intervention; and data collection.