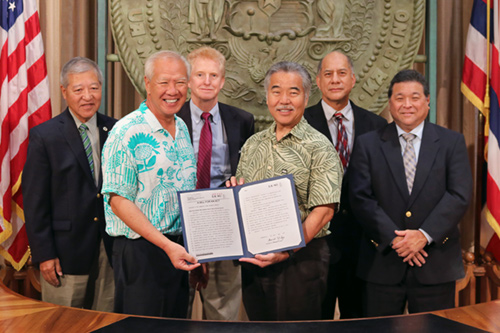 The District Court criminal calendars include numerous cases involving nonviolent offenders, many of whom face multiple life challenges, such as substance abuse, mental health issues, and limited or no access to basic needs, such as food and housing, for themselves or their families.

Under the Community Outreach Court program the Prosecuting Attorney works with the Department of the Public Defender and Hawaii Judiciary to clear a backlog of pending cases, including bench warrants for those nonviolent offenders with limited resources.

Participants are then teamed with counselors and service providers to address varying humanitarian needs and help them move forward in their lives.

The Judiciary, the Department of the Prosecuting Attorney, and the Office of the Public Defender conducted a successful soft launch of the Community Outreach Court project earlier this year with a grant the prosecutor’s office secured from the U.S. Department of Justice as well as assistance from The Center for Court Innovation.

Over the last five months, 21 people participated in the program and 318 cases were cleared. Fifteen of the 21 participants have completed their sentence by performing a total of 109 hours of community service. Three of the participants have gotten jobs, one has found permanent housing, and four have found transitional housing.

This project and collaboration with numerous social service agencies is working. One of the defendants who had been homeless for most of his adult life is now living in an apartment. It is hoped that the improvements in his living situation will give him the stability needed to progress with many other positive life developments.

The program is available to non-violent offenders who face numerous offenses, including bench warrants for missing court appearances.

“The early success of this program is encouraging. It proves that innovation works,” said City and County of Honolulu Prosecuting Attorney Keith Kaneshiro. “When different agencies cooperate they can achieve a common goal. Community Outreach Court holds people accountable while reducing backlogs in the courts, the public defender’s office and the prosecuting attorney’s office. But it also goes a step beyond that by providing immediate access to services to help participants improve their life situation.”

“The community outreach court has already resulted in the successful resolution of many non-violent cases which would otherwise have continued to clog the justice system,” added State Public Defender Jack Tonaki. “Thanks to the efforts of the Judiciary, the public defenders, the prosecutors and the many willing service providers, the court has been able to serve its participants with compassion and a view toward resolving their legal issues so that other social services could then be made available to them. SB 718 will allow this project to expand and reach more persons in need of such legal assistance.”

“Ultimately, this program is about people,” said the Governor’s Coordinator on Homelessness Scott Morishige. “While not every participant is homeless, those who are homeless can now address the underlying causes of their situations. They are turning the corner, getting housed and reengaging with the community. This is yet another opportunity for government to be more effective and efficient in the way we approach homelessness.”

“I want to thank Honolulu Prosecutor Keith Kaneshiro and state Public Defender Jack Tonaki for their tremendous work on the pilot project that proved the effectiveness of the Community Outreach Courts concept earlier this year,” said First Circuit District Court Deputy Chief Judge Lono Lee. “Some homeless individuals repeatedly come through our district courts arrested on minor offenses, building up unpaid fines or outstanding warrants that can keep them from obtaining gainful employment. In order to break this pattern, we must treat these encounters as opportunities to bring about change. The Outreach Court will work to get a roof over the heads of homeless individuals, and help them develop a support structure and the skills needed to stay off the street.”

The ultimate goal of the project is to send the Community Outreach Court and a treatment team out into the community to hold court sessions in non-traditional locations.