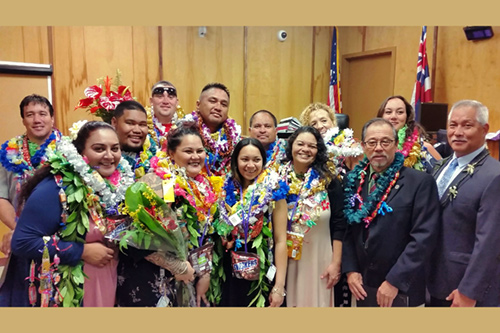 Kona Drug Court held its 39th Graduation Celebration on May 8 in the Kona Courthouse. The courtroom was filled with friends, family, and court personnel who came to celebrate the success of the 11 individuals who completed the intensive treatment program. This was the largest single group for any graduation since the Big Island Drug Court’s inception in 2002.

Drug Court Judge Melvin Fujino commended each graduate on their hard work and dedication. Drug court team members and staff also took the opportunity to acknowledge the graduates on their many the accomplishments in the program.

May is National Drug Court Month, which celebrates the many benefits drug courts bring to our communities through the successful treatment of drug offenders. According to national statistics, treatment courts such as the Big Island Drug Court save thousands of dollars on each participant who would have otherwise been incarcerated or on probation. Moreover, court treatment programs reduce crime and drug use in communities, and program participants are less likely to commit future crimes.