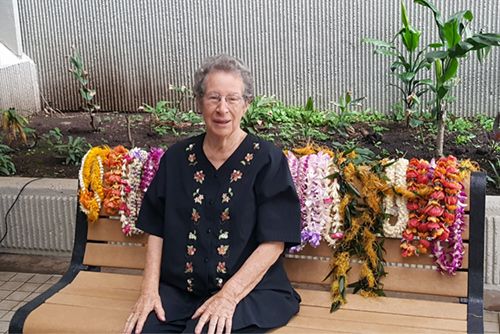 Jan Dapitan was honored during a special ceremony on Thursday, April 27, at Hoapili Hale, the Second Circuit Court building in Wailuku, for her role in spearheading Hawaii’s Environmental Court. A newly installed bench, made entirely of recycled plastic, was dedicated to Dapitan. Dapitan is the founder of the local non-profit Mālama Maui Nui, formally the Community Workday Program, and Hawaii’s former Keep America Beautiful leader.

“Jan was a staunch advocate of the state’s Environmental Court because of her commitment to protecting Hawaii’s environment, particularly its beauty,” said Hawaii Supreme Court Associate Justice Michael Wilson. “She stood for the proposition that an Environmental Court is important to provide for judges’ understanding of technical issues and the environmental laws we have in Hawaii. Jan worked with the Keep Maui Beautiful organization along with Maui’s state senators and representatives to develop the Environmental Court legislation.”