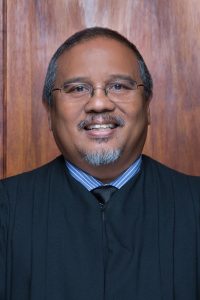 William M. Domingo was sworn in as First Circuit District Court Judge by Chief Justice Mark E. Recktenwald on May 18, 2015.  He was previously employed as a Deputy Attorney General, Deputy Public Defender, Assistant Federal Public Defender and in private practice as a criminal defense attorney.

Judge Domingo has been temporarily assigned to the First Circuit Court since September of 2016 as the HOPE probation judge.

He is a graduate of Wallace Rider Farrington High School, the University of Hawaiʻi and the William S. Richardson School of Law and was admitted to the Hawaiʻi State Bar in 1985.